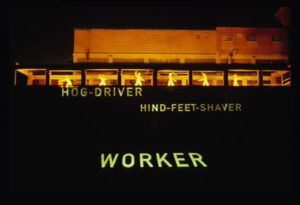 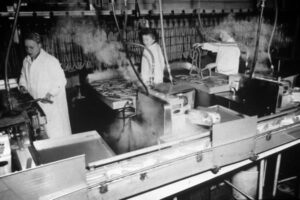 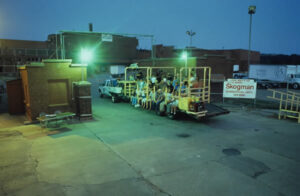 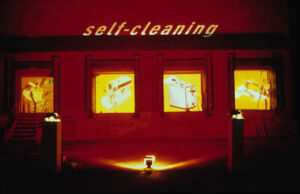 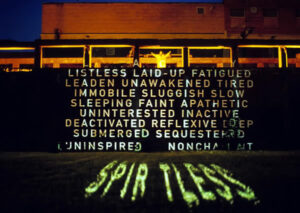 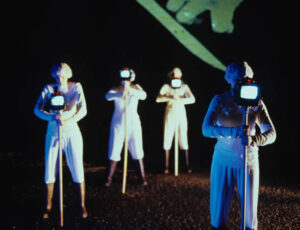 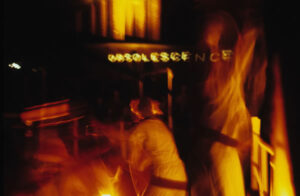 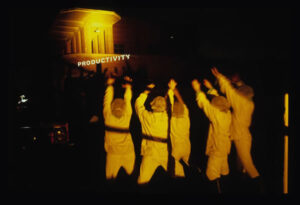 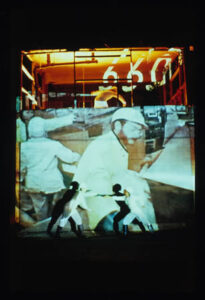 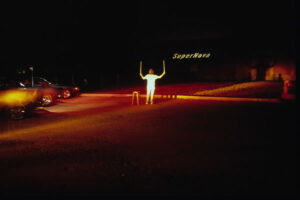 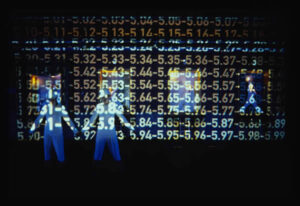 Public artists Jane Gilmor and BJ Krivanek joined together with Community Architexts to present Work-Shift, a large-scale sequential site activation at the former Sinclair-Wilson-Farmstead meatpacking plant–in operation from 1871 to 1990–in the devastated industrial neighborhood of Oak Hill in Cedar Rapids. Sited at an abandoned meat packing plant in Cedar Rapids, Iowa (once the second largest facility of its type in the world), WORK-SHIFT was a yearlong research project culminating in a July 2001 mobile multimedia performance. As the industrial era becomes the digital age notions of work and gender are altering. This performance gives homage to women factory workers from twentieth century.

The audience for the hour long event (held nightly during the Cedar Rapids annual Freedom Festival) was transported in a stock trailer from scene-to-scene along the perimeter of the old Farmstead factory, viewing text/video/ slide and computer projections along with live dance movement and narration to activate and articulate the lost histories of the site. Described by reviews as “drive-by History that mines the social landscape of Middle America in the late twentieth century,” this site-activation was based on months of reviewing state historical society records and interviewing women who had worked at the plant. Local women high school students created a web site based on their reactions to these interviews and their notion of what “work” would mean in their lifetime.

Work-shift was a community-based project that culminated in a site activation at an abandoned factory in Cedar Rapids, Iowa in July 2001. Work-shift collected and articulated publicly the narratives of the largely invisible community of displaced women workers once employed at one of the world’s largest meat packing plants. The final experiential activation of the site incorporated performance, projections (video, slide and text) audio and a website to highlight past and present labor histories.

The testimonies of displaced women workers were mechanically projected and juxtaposed with computer generated work by young women students onto urban abandon factory buildings. Work-shift explored the vulnerabilities of labor in the post-industrial Midwest and was intended to facilitate cross–generational discovery between two groups –women and girls, who have and will face very different working lives.

Sound: The sound scape was a digital collage created by multimedia artists Matt Butler, with transcripts from interviews read by Victoria Grube, which was constructed of layers of archival machine sounds and workers’ voices, submerging and emerging from the noise.

Movement: The performers developed a palette of choreographed movements that were either synchronized (based upon actual workers’ repetitive task motions) or improvisational. Artist Debra Jacque choreographed the movement and worked with Kelli Spengler and women students from nearby Metro High School.

Machines: Machines were omnipresent in this performance -as desired objects, as sounds, as systems –both repressive and expressive.

Video + Media: The videos projects on the site were either archival film footage of workers (like -x-rays into the past of the buildings) or re-creations of actions remembered by former workers. Chicago artist Nathan Peck created the videos.

Language: words are used in three ways: 1) A voice over narrative composed of many women’s stories 2) Projected inscriptions with taxonomies of job titles: 3) Archival voices were subsumed into the digital soundscape as if ghosts of the machines.

Work-shift was an act of urban infiltration intended to appropriate, reconfigure and inscribe buildings and structures. Work-shift was collaboration between Jane Gilmor and BJ Krivanek of Community Architexts, a non-profit Chicago-based art organization with the mission of reclaiming the practice of public inscription on behalf of invisible communities. This project was funded by Creativity in Design Grant from The National Endowment for The Arts, an Iowa Arts Council Project Grant, and a grant from the Greater Cedar Rapids Foundation.