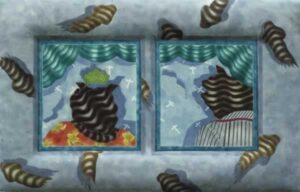 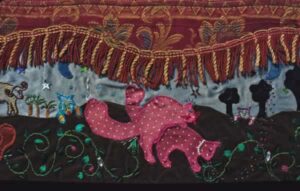 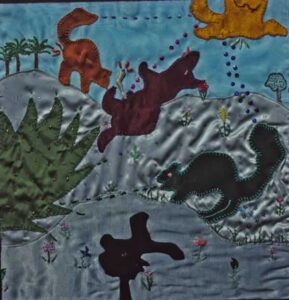 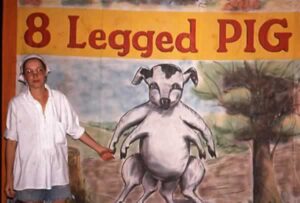 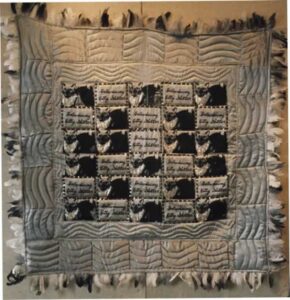 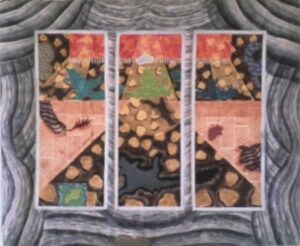 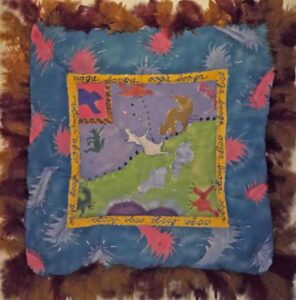 After graduating from Iowa State University in Textiles, I moved to Chicago where I studied at The School of The Art Institute of Chicago for a year while working for a team of periodontal surgeons as their bookkeeper (my only C in college). Textiles as taught at Iowa State University in the mid 1960’s had turned out to be less about artistic process and more about Home Economics.

In Chicago I encountered the art world and the work of the emerging Chicago Imagists including Jim Nutt and Gladys Nielsen. Their raw, flat, low culture imagery and their interest in so-called outsider artists like Max Yoakum had a critical impact on my work

In 1971 I returned to Iowa to get a teaching certificate from the University of Iowa. I soon wondered into the MA program in painting and began creating embroidered and stuffed paintings based on my image collection of animal stories and fairy tales (gone wrong) and Iowa State Fair freak show banners. Simultaneously, while in Iowa I was introduced to the work of Judy Chicago (who visited Cedar Rapids) and members of the West Coast “funk” movement, including Jens Morrison, William T. Wiley, Roy DeForrest and Robert Arneson. Elements of kitsch and a subversion of popular culture female stereotypes were key to my content.

The following year in graduate school at University of Iowa in Iowa City, we had professors and visitors such as Sherry Buckberrough, Lucy Lippard, and Mary Beth Edelman. Soon I (along with my friend Ana Mendieta) became deeply involved with The Women’s Art Movement of the 1970’s.