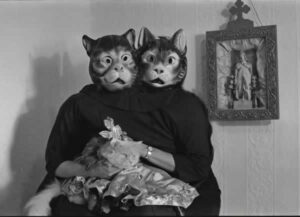 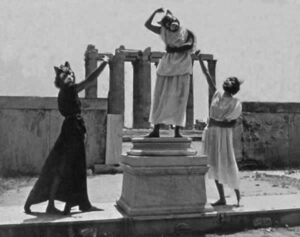 Eclecticism and Stress: The Splitting of Isadora and The All-American Glamour Kitty, performance Tableau, Temple of Olympian Zeus, Athens, Greece, 1978. 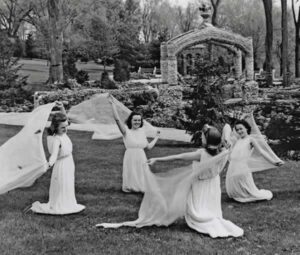 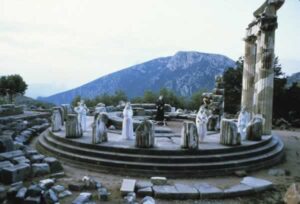 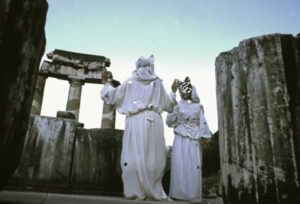 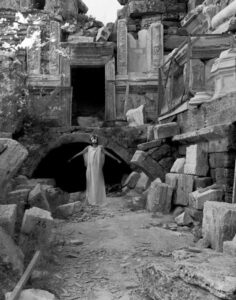 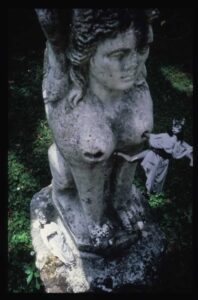 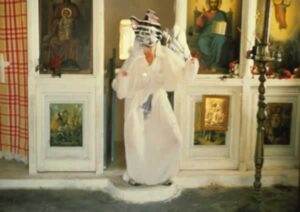 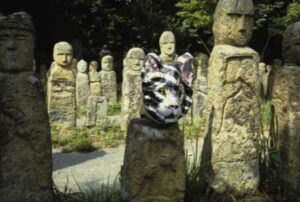 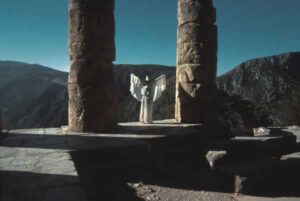 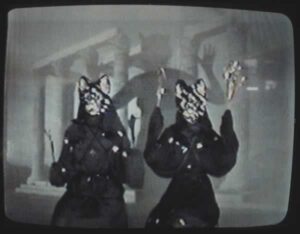 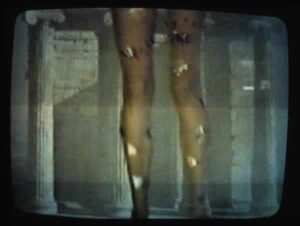 Great Goddesses: Do You Have a Light, video still, performer: Jane Gilmor 1979. 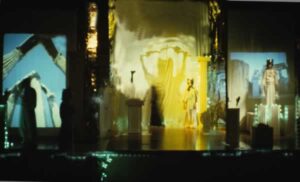 Following the 1976 All-American Glamour Kitty Pageant event and subsequent installations, and paintings, I adopted a cat-masked Isadora Duncan-like altar ego based on my research of ancient imagery associating “the feminine and the feline” with women and goddess archetypes. During the late 1970’s and early 80’s I took students to ancient sites in Greece, Egypt, Turkey, and Italy. There we staged a series of photo tableaux images and live performances. These performances were partially concerned with the construction and deconstruction of myths about women. In later work these animal hybrid goddesses also served to parody gender-related roles.

As a member of the Women’s Art movement of the 1970’s I worked alongside friends and colleagues such as Ana Mendieta and Mary Beth Edelson to visualize the female psyche as a strong creative force. Many of these images were used in Lucy Lippard’s traveling lectures on the topic and in her book, OVERLAY: Contemporary Art and the Art of Pre-history, Random House, 1983 and later in Broude and Gerrard’s The Power of Feminist Art: The American Movement of the 1970’s History and Impact, Abrams, 1994. Indeed, these performance tableaux both embrace and question the notion of female goddess archetypes in both past civilizations and the then current Women’s Art Movement (1970’s). Elements of ritual and melodrama compound the confusion. Are these images satire or worship of a goddess archetype – or both?

The photo tableaux by Jane Gilmor present such a startling collision of kitsch with myth that one may not know whether to chuckle or recite incantations. When Erma confronts the Great Goddess, one can’t help but wonder what each must be thinking about the other. A masterful m�lange of the modern and the ancient, Gillmor’s motivations lie in “construction and deconstruction of myth;” her great goddesses enact sacred rites in the ruins of temples, counterparts to the rituals that must have once taken place there in honor of mythological deities. The feline- headed personae, is reminiscent of vestal virgins or a kitty chorus for a Greek tragedy. As both Goddess and worshipers, these characters parody the animal associations with gender that we have come to adopt at face value in contemporary society. These works question all that we associate with modern religious pomp and circumstance, the solemnity of which seems a far cry from the performances staged by Gilmor, which blend a ceremonious melodrama with a healthy dose of satire.

Over the years, Gilmor has returned to the ruins of ancient religions in Greece, Italy, Egypt, and Japan (Booda Doo-da) and New York City (Terrorist Kitty at The Manhattan Bridge), where she has staged her performance/rituals. These cat-headed women in loose, flowing garb represent “the female psyche as a strong creative force”, while taking a tongue-in-cheek look at the way contemporary society associates animal images with gender characteristics. By incorporating satire and melodramatic gesture, the viewer is challenged into recognition of these stereotypes, and a subsequent questioning of their validity. Gilmor conceives myths as “created throughout our lives by day-to-day experiences and by the culture in which we live.” Our routine behavior can be seen as ritualistic; material objects in our culture have developed the status of shrines: significant others are “worshipped”; we create, in a sense, a unique religion of which we alone comprise the congregation. Ti is the realization of this mythic quality of our lives that Gilmor strives for in her work.

Jane’s art is consistent in its preposterous counter play of the fashionable and the enduring concerns from Baudelaire in that her sense of the enduring is not connected with the beautiful. Instead, it is curiously intermeshed with what she also sees as slightly bizarre — ancient myths, rituals, and folk customs. She forces our recognition of the intervention of these enduring forms into contemporary culture, mass media, social fads and social ills. The success of her work comes from the precise mixture of archeological and/or anthropological research, a slightly shocking juxtaposition of this information with remnants of our multi-media world and usually a reasonable dose of humor. To do this she needs to keep a sharp eye on both the past and the present in the world around her, and the engagement and distance of the concerned commentator.

Mixing the mythic and the prosaic, Gilmor is out to mine the resonances for archetypal figures and situations in the contemporary works. Wall altars seem familiar but just out of reach. Her monumental floor pieces, resembling tombs or gravestones, tend towards more complexity: One has dozens of nude figures with animal heads hammered in relief on its metal surface; another incorporates a small television monitor with a videotaped performance. Both formats evince Gilmor’s fascination with both Christian and pagan – especially early Egyptian – imagery. The recurring figure in many of these works is a woman with the head of a cat derived from an Egyptian Goddess.

Gilmor tells us we cannot glibly glorify goddess traditions without critical understanding, and clarifying our link to the past and our place in the future won’t be simple. The Book of Life contains a video of a ritualistic dance. A woman in a cat costume taps her heels, the repetitive movement seemingly without purpose. Mocking what might be a present-day temple hetaera. Gilmor questions the cultural construction of gender. She seems to say that human impulses toward religion are simultaneously absurd and meaningful, important and egocentric. We may laugh at the spoof on religious pomp and circumstance, but remain frustrated by the uncertain message.