The Architecture of Migration 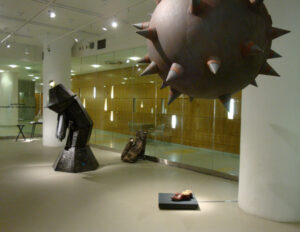 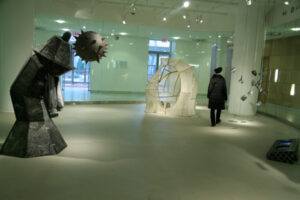 Installation view, The Architecture of Migration: I’ll be Back for the Cat, Long Island University, Humanities Gallery, Brooklyn, NY, 2009 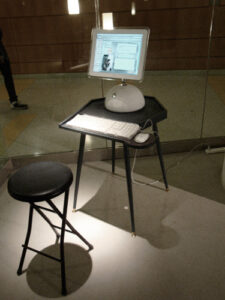 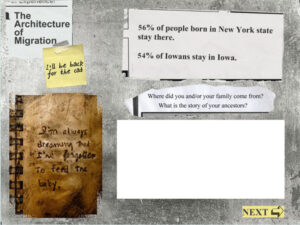 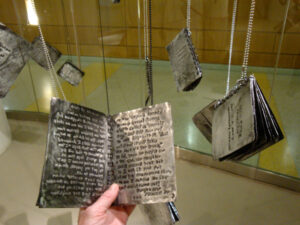 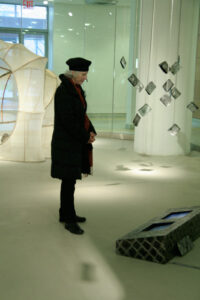 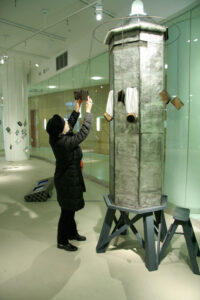 Installation detail, viewer with The Architecture of Migration, LIU, NYC, 2009 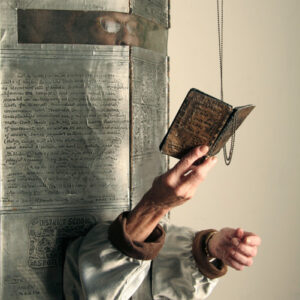 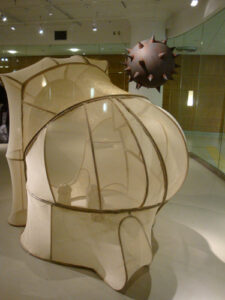 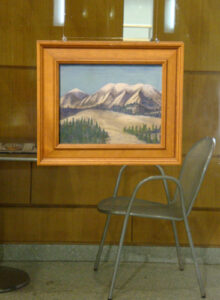 I’ll be back for the Cat, Dad’s shoes and fake fur, attached to hidden neck massager (moves slowly in circles) LIU, NYC, 2009 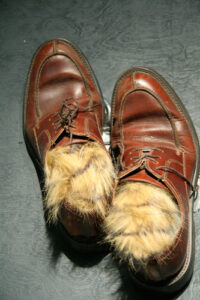 Detail, I’ll be back for the Cat, Dad’s shoes and fake fur, attached to neck massager (moves in circles slowly), LIU, NYC, 2009

An installation by Jane Gilmor

The Architecture of Migration: I’ll be back for the cat is a traveling installation of work from the past ten years exploring the psychology of personal and cultural migration. Issues of identity, dislocation and border crossings: public/private, poverty/privilege, rural/urban, male/female penetrate both the form and the text of these works.

The exhibition began at Long Island University it Brooklyn in November 2009 and most recently traveled to St. Ambrose University in Davenport, Iowa in March 2010. As part of that project artist Matt Butler helped me create a web site and online survey for students, staff and faculty at LIU, ST. Ambrose and at my home institution, Mount Mercy College in Cedar Rapids, Iowa. Stories of migration (large and small) are shared on this site. Anyone interested is now invited to contribute his or her own story at
Back For The Cat

The two newest works in the exhibition include the installation of hanging metal books created from the selected text submitted to the www.backforthecat.com web site. Hanging midair across from the room are back to back pastel drawings by my mother, Margery Ann Maberry Gilmor, showing her college home in the Colorado mountains on one side and her new home in Iowa on the other (circa 1050). Not far away are my father Fred Gilmor’s shoes subtly rock back and forth in a soothing motion that seems headed forward but goes nowhere. Inhabited only by something that resembles a cat’s tail Fred’s shoes relate to the title from a found handwritten note, “I’ll be back for the cat”, and his love for his cats.

On the floor near the books a tombstone like marker covered in simulated chain link fencing houses two videos. One edited from the dating section of a 1960’s Portuguese language tape and the other documenting my own adventures wandering a 5,000 year old Neolithic stone circle (also in Portugal) wearing my very phallic, handicap accessible, portable hunting blind. (See links)

The earliest work in this exhibition, In Between: The Architecture of Migration (2000) was the first in my series of wearable structures that both connect and disconnect their inhabitant with the outside world. As a philosophy professor visiting the gallery quipped, “it seems meant to confound meaning, not create it.” I recently placed the structure (resembling a baby bottle) on a platform, raising it to the level of border patrol and voyeur.

The exterior metal skin is covered with text from U.S. government travel alerts, Canadian Nationalist websites, my mother’s travel diaries, notes from homeless teens, and directions from the Encyclopedia of Crafts. The interior is a warm copper incised with test and marks made by a hospitalized woman while on a respirator and near death. The viewer can enter the structure and become a performer by extending arms through the provided sleeves, looking out the screened opening, and reading aloud from one of several books hanging from an elevated hoop. This work took on new meaning when it was on exhibition in New York on September 11, 2001.

The Architecture of Fatigue (2004) was the second in my wearable series sometimes referred to as Containers for the Self. The six -foot structure is superficially based on psychological research connecting physical posture and facial gesture with mood. The piece responds to the personal and cultural sense of “overload” that has come with out post-industrial era. Again the wearer can connect with outside world only by touch, sound, and obscured vision. The outside text and images come from early twentieth century ads for fatigue remedies and energy restoration devices. Video monitors embedded in the “skirt” reveal a close-up of the artist rubbing tired eyes and moaning. Ironically the structure appears passive and submissive, yet when an arm extends to connect, viewers jump back in horror.

Near Fatigue is a small selection from the work Pillows (1995-2006), a series of twenty hand-fabricated metal pillowcases housing feather pillows salvaged from a defunct convent.