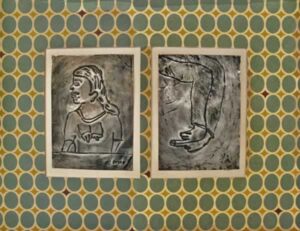 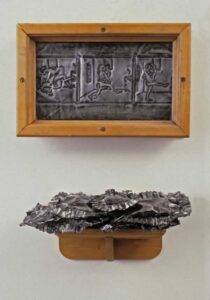 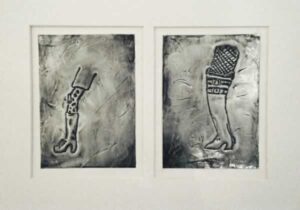 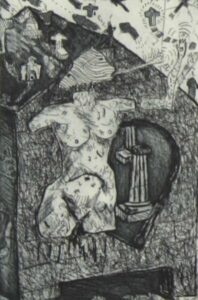 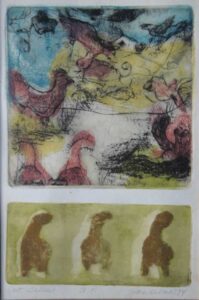 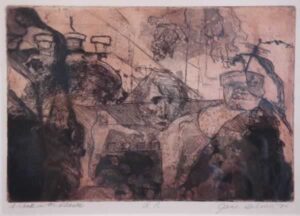 These prints seem to continue my fascination with the construction and deconstruction of myth and memory. My favorite art from past and present cultures comes from collective and individual imaginations able to extend ordinary experience to the level of myth. My prints, in particular, are indebted to Mexican ex-votos, Mediterranean devotional art, and Midwestern visionary art and vernacular architecture.

In 1971 I completed an M.A.T. degree with emphasis in printmaking at The University of Iowa, Iowa City. The last print in the above series is from my graduate work there. Since then, though focused on concept based intermedia and installation works that often involve drawing, sculpture, and video, I regularly create prints while teaching students on our Mexico Term in Oaxaca. Working in Charles Barth’s studio there we work with students in a variety of print media. My emphasis in graduate school was etching and that seems to dominate my approach. In graduate school we were encourage to work very large so of course my first print after grad school was tiny and broke every rule in the Lansansky studio. As with my other work I often work in diptychs and other series formats. My prints tend to be more figurative and narrative than other work — perhaps originally more related to my early 1980’s wall reliefs.

The imagery in all the prints relates to concepts I am dealing with in all my work at the time. Thus, the Hairy Tales series leads up to my All-American Glamour Kitty Pageant project in 1975-6. The etching Defending Yourself Against Injury, was created while an artist in residence at Dennison University in 1991 and combines images from my journals with drawings and notes by disenfranchised individuals living in shelters, safe houses, or nursing homes. I began working on these community-based public projects in NYC in 1986. This etching, then, deals with issues of homelessness. In this context I think of home as the physical manifestation of a spiritual concept. The central image was created by Susan J. a resident of a Cedar Rapids shelter for adolescents, The two notes from “Jack” were found stuffed in the drawers of and empty house that friends of mine had purchased. Jack’s wife had died and he was being moved to a nursing home so the house could be sold. Jack and his wife had lived in the house for fifty years.