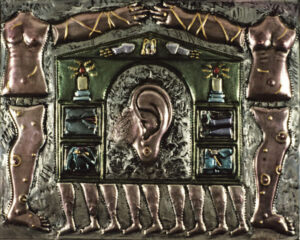 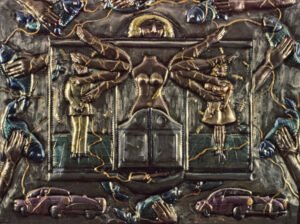 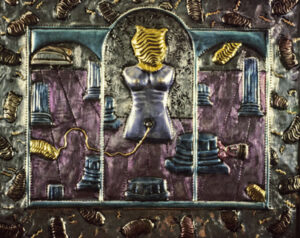 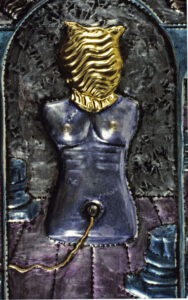 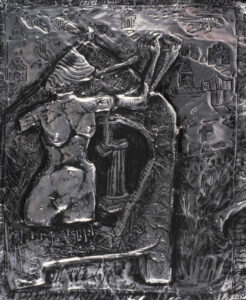 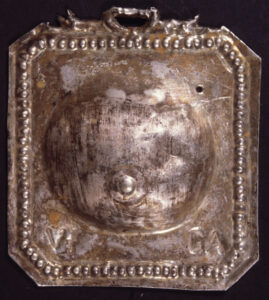 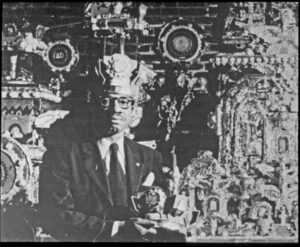 James Hampton with a section of his created environment The Throne of the Third Millennium of The Second Coming constructed over 20 years from old furniture, foil, and electric lights, in a garage in D.C., circa 1950’s, now owned by the National Museum of American Art, Washington, D.C. 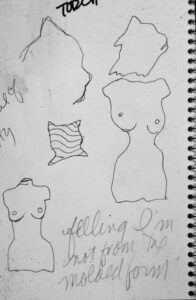 What are the deeper relationships between myth and experience? This series of small painted aluminum reliefs are psychological narratives. Although my art does not usually tell specific stories, these works often do. One of my recurrent themes is a questioning of cultural myths about women. I often use animal-human hybrids to parody our sex-related societal roles. The figurative elements of these works are influenced by contemporary and ancient Greek, Byzantine and Minoan votives and icons.

Both the content and use of materials are intended to create a ritualistic ambiance. My interest in the physical manifestations of spiritual concepts often incorporates elements of satire and melodrama, but in the end my work is united by a belief that art can help make meaning of one’s experience. The reflective aluminum surface is a private metaphor for relationships between illusion and reality. The works are small so they might be a more intimate experience for the viewer. Hopefully that private experience brings insight, humor or confusion.

While taking students from Mount Mercy College to Greece, Egypt and Turkey in the summers of 1977 and 1978, I was introduced to another form of outsider or folk art. While working on my performances at ancient Greek ruin site, I discovered primitive homemade shrines along the back roads. Though we find these in the Midwest now (2009), as a result of the influence of Central American immigrants, I had never seen anything like them at the time. Along the side of a road, usually where someone had died in an auto accident, family members would build small shrines of stucco, usually taking the form of a house or other area architecture. Inside the shrine were pictures of the deceased with candles, food or cigarettes, and metal ex-votos in the shapes of figures or body parts. The primitive but powerful forms of the shrines themselves and the metal repoussé and ex-voto’s once again reminded me of the power art has to make meaning of one’s experiences.

Aware of the tradition of icon making in the Greek Orthodox Church, I searched for an old icon artisan to could show me the repose process. Instead, I found young men making copies of medieval icons and silver ex-votos (arms, legs, feet, figures) in tinfoil. The process was essentially the same but much easier. And, of course, their imagery was influenced by popular culture. In 1981, I began a series of small repousse aluminum reliefs (36 gauge) telling various stories about my life in relation to ancient Greek mythology and myths about women, in particular. Works such as “Our Bodies Worry Us” deal with issues of identity and dislocation.