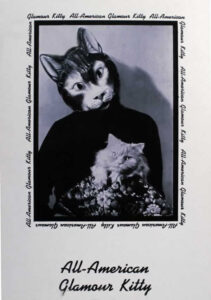 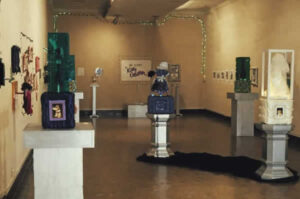 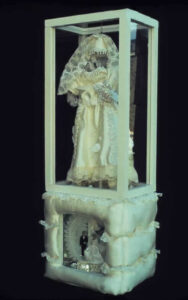 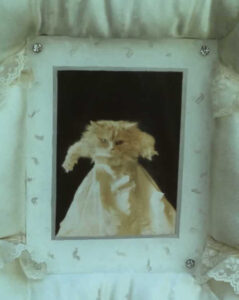 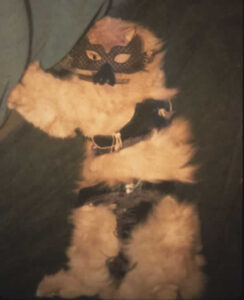 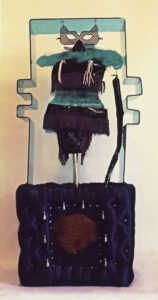 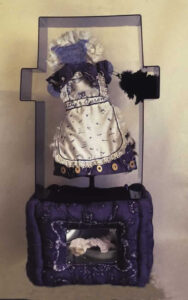 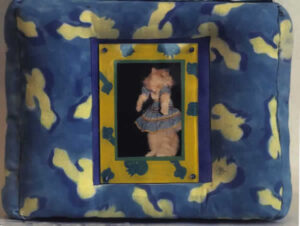 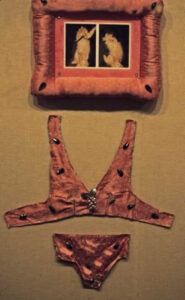 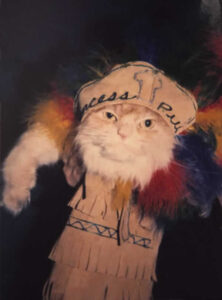 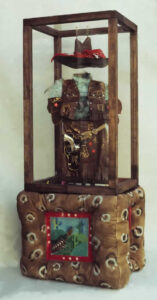 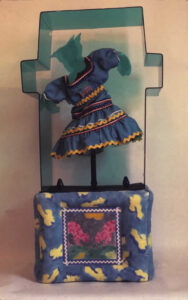 In the Fall of 1976 I did an exhibition at Coe College in Cedar Rapids based on my experiences and collected artifacts from the 1976 All-American Glamour Kitty Pageant (see separate web site under that title). This began a long series of installations and [performances based on the Glamour kitty Altar ego.

To review: In April of 1976, I noticed an unusual form on the back of my bag of kitty litter. It was for the Eleventh Annual All-American Glamour Kitty Pageant. For the past year I had been making clothes for my cat, Ms. Kitty Glitter, as part of a feminist conceptual artwork. I took several photos of Ms. Kitty wearing her outfits (housewife, go-go girl, Indian maiden, cheerleader, bride, etc.) and entered them in the national competition. Over a period of several months, she was graduated from one of 250 regional winners, to one of eighteen semifinalists, to one of the nine finalists out of 20,000 to be flown to Miami Beach for the finals. Waverly Mineral Products who make the All-American Glamour Kitty brand litter sponsored the contest. This contest provided their main publicity for the product for a dozen years.

Ms. Glitter began to receive local and national media attention, as well as numerous prizes including a year’s supply of kitty litter, jeweled cat collars, engraved silver platters, and a TV set. As one of the nine finalists, Ms. Glitter and I were flown to Miami Beach for a week of “competitions” at the luxurious Hotel Fontainebleau. Two other events were being held at the Fontainebleau while we were there, an international conference on psychics (including academics and psychic Sybil Leet) and the annual conference for The National Organization of Little People.

Included in the week’s events were the Mouse Mobile Motorcade through downtown Miami, (nine Volkswagen Bugs from the local exterminating company painted like big mice) The Kitty Fashion Show, The Kitty Olympics, and the Coronation (emceed by former Miss Universe Pageant announcer Chuck Zinc). Sister Mary Louise from Pennsylvania won the fashion show competition. She dressed up like Pocahontas and dressed Harry, her cat, like Davy Crocket. The Grand Prize winner would get their cat’s picture on the front of the All-American Glamour Kitty brand cat litter for one year and win a trip to Philadelphia for a week’s vacation at the hotel where the first outbreak of Legionnaires Disease had occurred the week before our competition! No one really wanted to win after the outbreak. Ms. Kitty Glitter won the 1976 Ms. Congeniality Award!

Later that year I did the installation at Coe College in Cedar Rapids, Iowa and a series of performance events based on this bizarre experience. In the following years I developed a series of tableaux and performance pieces based on a cat-masked, toga-clad alter ego attempting to deconstruct everything from Pre-Classical Greek Mythology to Mary Kay Cosmetics.